(WINDSOR, ON) - Even while Windsor started out on a 14-2 run, last night's NBLC match-up with London was anything but a walk in the park. The Express kicked off their 8th season with an 85-84 victory over the visiting Lightning.

A big part of the opening run, and a key piece of the win was the play of Derrick Nix. The native Detroiter and NCAA Final Four competitor with the Michigan State Spartans spearheaded the opening minutes and set the tone for the remainder of the game.

Former MSU star Derrick Nix lays up two of his 20 points en route to leading the Windsor Express to an 85-84 victory over the London Lightning on 28 December 2019.
Ian Shalapata

"(Nix) went out there and played well. He held our post down. He got us going early with some good baskets. He made some free throws," said Express head coach Bill Jones. " We’re a blue collar type team and those are the players we try to recruit and have play in our organization. It was a good win for us."

The crowd of over 1,300 watched a unique and very effective defensive style from Nix. He used his body to good measure as well as constantly moving his hands at a rapid speed which didn't allow the opposing player to set up.

"It came from Pershing High School. The neighbourhood I come from, always fighting," Nix explained. "It’s just something that God gave me and I try to use my ability. Sometimes I over do it, but tonight we needed that."

The win came after Windsor trailed the Lightning for much of the middle periods. The Express were 10 points behind at the half, 52-42, but managed to take advantage of London's 35% shooting in the 3rd quarter to close the gap. Heading into the final stanza, Windsor was on the wrong end of a 64-63 score.

It was a full 50 seconds into the quarter before London's Garrett Williamson hit on one of two from the line to record the first point of the period. The Lightning led by as much as 5 points before Windsor finally tied the match at 70 on a Kemy Osse layup with 8:02 remaining.

The agile Kemy Osse directed the Windsor offense against London on 28 December 2019. Osse was filling in for the injured Chris Jones and delivered 19 points, 6 rebounds, 3 assists, and 2 steals in an 85-84 victory to open the 2019-20 NBLC season.
Ian Shalapata

"That’s the one thing that we looked at being able to fill the position, what he’s able to do," Jone described Muldrow. "He’s a stretch player, he’s able to knock down the three point shot, he’s able to rebound the ball. And then, he’s tough in the interior. So to be able to have five blocks out there, that was a force."

The line on the 6' 8" Muldrow included 13 points and 10 boards, in addition to the five rejections, in 39 minutes. He previously played two seasons in the NBLC with Niagara, but most recently in Rio de Janeiro with Club de Regatas Vasco da Gama.

"I think I played pretty good. I did what I could to help my team," Muldrow said. "I also think we can do a lot better. But, it’s just the first game and we have a long way to go."

The always dangerous Lightning built another 4-point lead when Marcus Capers slammed two points as the clock ticked to 3:16. Another dunk, this time by AJ Gaines at 2:10, lifted London to an 84-81 margin. Osse hit a jumper to pull Windsor to within one, but a series of turnovers by both teams managed only to shave 2:08 off the clock.

Deep in the London zone and with time running out, the newly reacquired Shaquille Keith connected on a fade away jumper over Capers in the corner to see Windsor clear London. A miss by Williamson sealed the deal and the Express had one in the win column.

"He’s our type of player and now he’s not a rookie or second-year player, he’s a veteran. So, when you get paid to do a job you’re expected to do it," Jones said. "We pay him to be able to make clutch shots for us and we drew the play up for him and he made a tough shot." 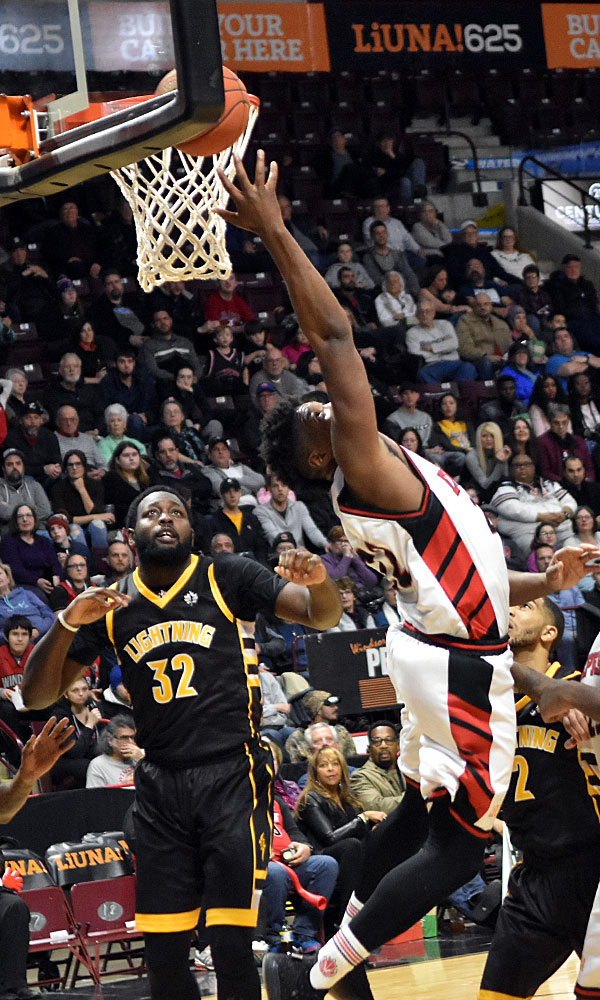 In his third tenure with the Windsor Express, Shaquille Keith (22) delivered the winning bucket to secure an 85-84 win over the London Lightning in the at-home season opener on 28 December 2019.
Ian Shalapata

Nix led the Express offense with 20 points and point guard Kemy Osse, seeing a lot of floor time in place of the injured Chris Jones, added 19 of his own, and Keith had 13 on the night.

"It was a good win for us. This is a bounce back season so to be able to start the season in front of a good home crowd was something we were glad to have," Jone said.

Windsor will face London on the road next Thursday before returning home to host the Sudbury Five on January 4.

The Express were without two players to start the season. PG Chris Jones and G Davon Dillard were scratches from the opening night roster and instead on the Injured Reserve. Windsor lost another key player, PF Kirk Williams Jr, who went down late in the game during a freak mix up with a member of the Lightning. Fans were hushed as first responders attended to Williams on the court with an upper body injury.